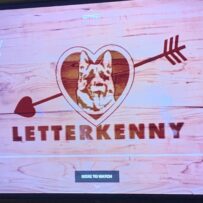 Anyone that reads these posts, is aware how much I love the Crave/Hulu Show LetterKenny.  This pic was taken from the shows intro for their Valentines Special.

Jared went so far to create a beer for the show called “Pupper’s”, they make reference to this beer throughout every episode.  The show did such a great job advertising it, a Canadian beer company created an actual beer called Pupper’s  – currently, available only in Canada.

Love the tag line on the posters – U can see hanging in their local bar “MoDean’s” in the show – “Who’s a good beer..?”

This site uses Akismet to reduce spam. Learn how your comment data is processed.