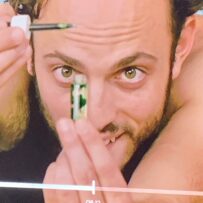 Have U seen the magnificently written, flawlessly acted show on Hulu called Letterkenny?  If U haven’t it is a MUST!!

Letter Kenny was created by Jared Keeso, and written by both Jared and Jacob Tierney and then they both star in the show as well.  Letterkenny has won all the top honors in Canada – winners for best comedy show, best actor (Jared).    All well deserved!!

I can not begin to share how fantastic this show is – there is so much dialogue within each scene and, throughout the show –  all the characters are played as if there is no acting involved – again the dialogue between them all is non-stop witty and intelligent.

In the pic, U can see I spotted a heart within the vile.  I must say I was excited to spot it, considering it provided me with an opportunity to share this show with U.  Now, pitter patter, GET TO WATCHING IT!!!

This site uses Akismet to reduce spam. Learn how your comment data is processed.